This competition started this year as a “once every five years” contest.

Everything, they’re going to play a piano from the era when Chopin was alive.
Heh, sounds kind of interesting.

I bought the ticket with a light-hearted attitude of “I’m not a fan of this”;
I don’t know much about music at all, but I went undercover.

What is the Chopin International Competition for Period Instruments? 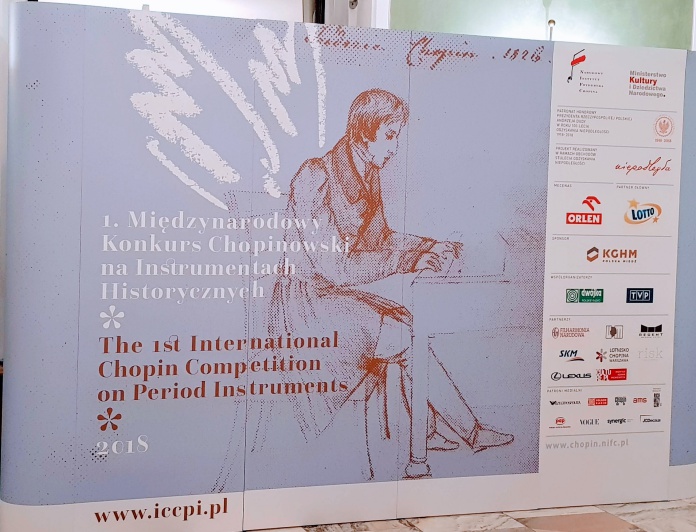 The most famous competition in Warsaw is the Chopin International Piano Competition, considered one of the “World’s Three Great Competitions.

The competition is said to be a gateway to success for pianists, and tickets for the competition, which is held only once every five years, sell out quickly and are very popular.

What is a period instrument?”

I looked it up because I thought it was
“Old Instruments.”
I found out that it was an “old musical instrument”.

Just as electrical appliances and materials are evolving, musical instruments are said to be evolving with various improvements.

And
As instruments have evolved, playing methods and sounds themselves have also changed
And.

Comparing old and new computers, they are different! It’s so totally different!
The same can be said for the piano.
Then…
Even if you play the score on today’s pianos, you can’t reproduce the music Chopin played back then.
I think that’s what you’re saying.

This is where period instruments came in.

And well, here is what I, a layman, barely understood ^^;

The competition organizer, the Institut National de Chopin, says that the emphasis is on performing Chopin’s music on period instruments.

The venue for the second round was the smaller hall, so it was surprisingly small.
It looks like a movie theater.

The two contestants each performed for about an hour.
The tension was so great because it was a competition…

If I cough too loudly here, it will distract the contestants from concentrating…

That makes me nervous too!

The band played for about an hour straight, changing pianos along the way.
He didn’t have the sheet music, so he seems to have memorized everything.

The two musicians were outstanding, as they are both winners of numerous competitions.
(The results were announced a few days later and both of you are finalists! Amazing!)

But as someone who doesn’t know much about music, I’m impressed by things like “How can you move your hands so fast?” and other unimportant things ^^;

There is a 20-minute break between the first and second performances, and

I thought that cameras were not allowed in such a place, but everyone was snapping photos, so I joined in and snapped a few.

This is the piano when Chopin was alive?

By the way, as is typical at events, there was a line for the women’s restroom.
I was so engrossed in watching the piano that I didn’t have time to go to the bathroom …

Pamphlets and concert merchandise were available for sale in the lobby outside the venue.

I honestly don’t think there were that many goods that I wanted.
It might be fun to buy the brochure before listening to the performance.

I’ll be watching the final stage (the main competition) on Thursday! I’m looking forward to it!

The next one is scheduled to be held in 2013, so it will be a long time before then, but if it will be of any help to anyone then…

I was able to buy it from the official website.

Perhaps because this year was the first time the event was held, tickets were available even at the last minute.

The Chopin Piano Competition, also held once every five years, seems to be getting more difficult to obtain tickets every year.
Could that be the trend for the Chopin International Competition for Period Instruments?

Schedule, location, duration, and hours for 2018

Map of the venue
Warsaw Philharmonic

A stunning final! I went to the Chopin International Competition for Period Instruments and Final
Day of the Dead in Poland: Visiting a cemetery at night with a magical atmosphere
RECOMMEND