in Warsaw the other day.
Frederic Chopin Museum
I went to the
Here is a photo-heavy report of the event.

For basic information about the Frederic Chopin Museum, please see our previous article.


関連記事Chopin Museum @ Warsaw] Summary of basic information on how to get there, what to see, tickets, etc.
2022.11.29
Free admission days as of 2019 are Wednesdays.

When this article was prepared, the free admission day was Sunday, so the crowds may have changed somewhat.

Contents show
1 That’s how you get tickets for Wednesday at the Chopin Museum!
2 0F Looking Back on Chopin’s Youth Warsaw Edition
3 -1st floor: immersed in Chopin’s music
4 1st floor: Chopin’s last years and his private side
5 2nd floor: Chopin’s Journey, and Death
6 summary

That’s how you get tickets for Wednesday at the Chopin Museum!

I went there on a free day because it was a good deal. (I visited on a Sunday because Sundays were free admission days at the time.)

When I arrived at the ticket office at exactly 11:00 on Sunday, it had not yet opened.
But there are already more than 20 people in line …

I had heard that the free admission day was crowded, but I didn’t expect it to be this crowded in the off-season at the end of November.
The fearless Chopin.

There were two entrances to the ticket booth, each with its own line.

What to do, which line to get in… I don’t even know if there is a difference.

I somehow got in line in front of the door on the right side where a couple of people who looked like Japanese girls were lined up at the front of the line.

The ticket office opened about five minutes after 11:00.
Customers enter from each of the entrances on the left and right.

The attendant prioritized the row of doors on the right! Lucky me!

Those in line on the left reluctantly rejoined behind the line on the right.
I wish they would at least put a piece of paper on the door ^^;

Got my ticket without incident and was admitted straight away!

By the way…
I had the opportunity to go on another Sunday in November as well, and
When I got to the ticket booth around 11:30am, admission was already restricted!
…

Unless you go first thing in the morning, there will likely be a wait to enter.

The museum is designed to give visitors a retrospective of Chopin’s life.

There was also a puzzle game in the children’s area.

On the next basement level, visitors can listen to plenty of Chopin’s music.

This piano caught my attention. 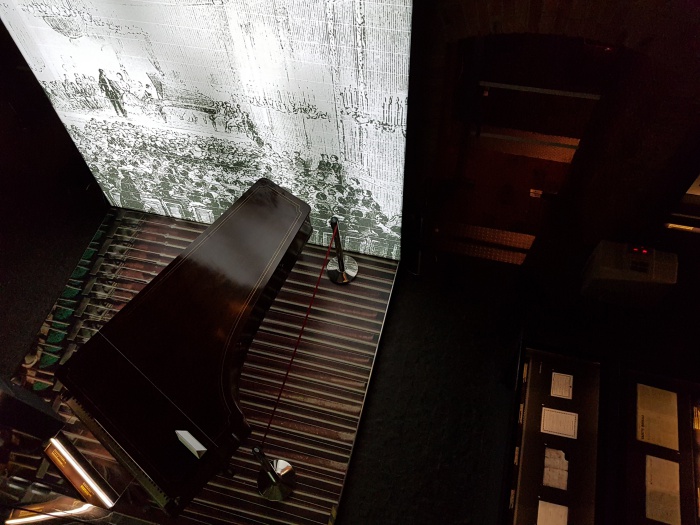 I wonder how it works….

There was also a theater room where visitors could watch videos of past Chopin Competitions.

There is also an area that looks like an audiovisual room.

The seating was divided by piece, such as waltzes, sonatas, and ballads, so that one could listen to a single work in its entirety.

1st floor: Chopin’s last years and his private side

When you go up to the first floor, the first thing you see is
The piano where Chopin last played
the piano that Chopin played at the end of his life.
I was surprised to see it very close up, even though it must be quite valuable.

I think that many of the exhibits on this floor were about Chopin’s personal side.

What kind of relationship did Chopin have with that man of rumors!” and other exhibits ^^;
Great people even talk about such things to future generations…it’s tough.

The last area of the exhibition was about Chopin’s travels around the world and his death.
Other collections focus on Chopin’s personality.

Although I did not take pictures, masks and hair that recreated Chopin’s face at the time of his death were also on display.

To be honest, I went there knowing very little about Chopin, but the way the exhibition was presented was very creative and I enjoyed it more than I expected.

Click here for basic information about the Chopin Museum ↓↓↓.


関連記事Chopin Museum @ Warsaw] Summary of basic information on how to get there, what to see, tickets, etc.
2022.11.29
Warsaw University has a Japanese language department.

The University of Warsaw has a Japanese language department.
Therefore, I occasionally meet people who speak fluent Japanese on the street.

Especially when I go to Japanese restaurants, I see them.
I was surprised to see him ordering in fluent Japanese, ” Excuse me, matcha pudding, please!

I am usually so comfortable talking to people who don’t understand Japanese that I get nervous when someone who does suddenly appears;

The library at Warsaw University even had a tea room!
Are they using it for circle activities?

I wonder if there is a Polish language department in Japan.
I don’t think it was even at the University of Foreign Languages…

Japanese living in Warsaw go there! Cafe "batida" near Shinsegae Street
Warsaw Old Town】Café "To Lubię" where you can take a relaxing coffee break.
RECOMMEND