It is located between the Chopin Museum and the Vistula River, so you can walk there while sightseeing.
It is a place where you can enjoy modern Polish cuisine that is different from the tourist restaurants. 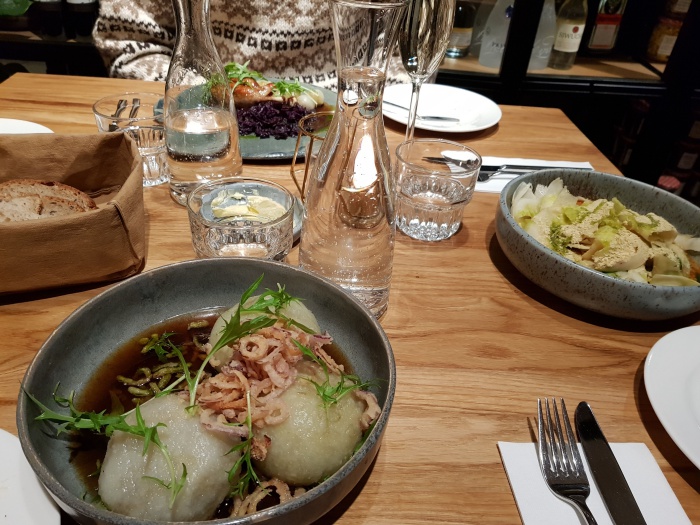 The genre is creative Polish cuisine.

You can see the menu from the official Facebook page, but it is all in Polish, so the hurdle is high.
The restaurant has an English menu.

It is also a bar, so the drink selection is quite extensive.

A special lunch set is also available on weekday noon.
Looks like we’ll get 25 zlotys, appetizer to dessert!
I’d like to go there next time.

What you think of the restaurant and what you ordered

The entrance to the restaurant is on the second floor up the stairs.
It was a crazy cold day with snow falling, but the atmosphere looks pleasant in summer.

Of all the dishes I ordered that day, this was my favorite!

The Holoholo bird (Polish: perlicka) is a member of the pheasant family native to Guinea, Africa.
It is also known as the “Queen of Birds,” and is popular as a luxury food in Europe.

I ate it for the first time and it was very delicious ^^.
Just the right amount of juicy and tender!
It was more elegant than your average chicken!

The dough was chewier than regular pierogi and filled with gibier meat.
It is a variant pierogi.

The taste is rather peculiar because it is gibier meat, and it is a taste that can be liked or disliked by different people.
(I don’t know what kind of game meat it was, but I think my friend said venison, but I couldn’t understand her English very well…)

Tagliatelle is a flat pasta. It looks like a creaky noodle.

I was expecting a flat pasta dish with only vegetable filling.
My goodness, the noodles were vegetables!

The novelty of zucchini and other vegetables processed to look like kishimen noodles…how is that possible!

My two friends loved it, but I didn’t….
I want noodles to be noodles and vegetables to be vegetables.

Atmosphere of the store

Everyone in the restaurant seemed to be local except us.
I get the impression that many people use it for girls’ parties and dates.

It is also a cocktail bar, so if you come late at night, maybe it will be noisy. This is just a guess.
Because Poles turn into Pearly Peoples at night ^^;

The atmosphere of the restaurant around 7pm when I went was very nice and stylish.
I enjoyed my meal at a leisurely pace.
I guess the service is average level.

I only hit one of the three items on the menu that I ordered, but I was satisfied just to have the horohoro chicken ^^.

How to get to LAS – Lokalna Atrakcja Stolicy (Warsaw), basic information

Streetcars and buses in Poland do not have turnstiles.
There are some on the subway, but most of them are easy to get through. In fact, most people go through the loophole that has been openly set up next to the ticket gates.

How do they manage without turnstiles…

There is an imprinting machine inside the train (or at the ticket gate in the case of the subway) that will imprint the time of boarding onto your ticket, which is then used to validate your ticket.
Then, when the ticket examiner comes, show the ticket that has been stamped.

A penalty of approximately 5,000 Japanese yen will be imposed for riding without paying.(In Warsaw)
This is 50 times the normal ticket price.

However, I only see the ticket examiner once in a while, and I wonder if they are able to run their business properly with such a lax system.
Won’t that cause a lot of people to ride without paying?
I always thought it was a gimmick.

I found a news that blows away such a gimmick of mine.

According to the company that manages Warsaw’s public transportation system, there were approximately 220,000 confirmed non-paying passengers in 2018.”

More impressive, however, is the total amount of fines collected from non-paying customers.

‘In 2018, when we tightened up the ticket inspection, the total amount of penalties collected from non-paying passengers amounted to 32.8 million zlotys.’

Perhaps, as one might expect, the management of Warsaw’s transportation system depends on unpaid rides ^^;
This lax system may have been intentional…

Chopin Concert 2019 at Wajenki Park! Learn about this year's schedule and whether it will be held on a rainy day.
6 recommended hotels in Warsaw! We have carefully selected popular hotels convenient for sightseeing by area!
RECOMMEND