located on the outskirts of Warsaw, about a 30-minute drive from downtown Warsaw.
Vilanów Palace
I went to the

Vilanów Palace is also known as the “Polish Palace of Versailles.
The palace is filled with luxurious furnishings and artwork, and its splendor is overwhelming.

This article provides an overview of the Villaneuf Palace, its history, how to get there, hours of operation, and other basic information.

You can see what it was like when I actually visited here.
Please read on if you like, as I have included more photos to convey the luxurious atmosphere of the palace.

Contents show
1 What is Vilanuf Palace? Overview & History
1.1 Who is Jan III Sobieski?
1.2 Jan III and the Vilanuf Palace
2 3 Highlights of Vilanuf Palace
2.1 This is royalty! Luxurious Furniture & Decor
2.2 Antique “Secret Bookshelf”
2.3 No longer art! A garden that changes its expression with each season
3 Basic Information] Directions to Villaneuf Palace, hours of operation, holidays, and ticket prices
3.1 How to go by bus
3.2 How to get there by metro or streetcar
3.3 Hours of Operation and Days Closed
3.3.1 Palace Hours and Closing Days
3.3.2 Garden Hours and Closing Days
3.3.3 Approximate duration of stay in palaces and gardens
3.4 Ticket Price
4 What to expect when visiting Vilanuf Palace
4.1 The ticket office is far in front of the palace.
4.2 Always check your backpack.
4.3 Restrooms are in front of lockers before the entrance gate
4.4 There is a free commentary app.
5 summary

What is Vilanuf Palace? Overview & History 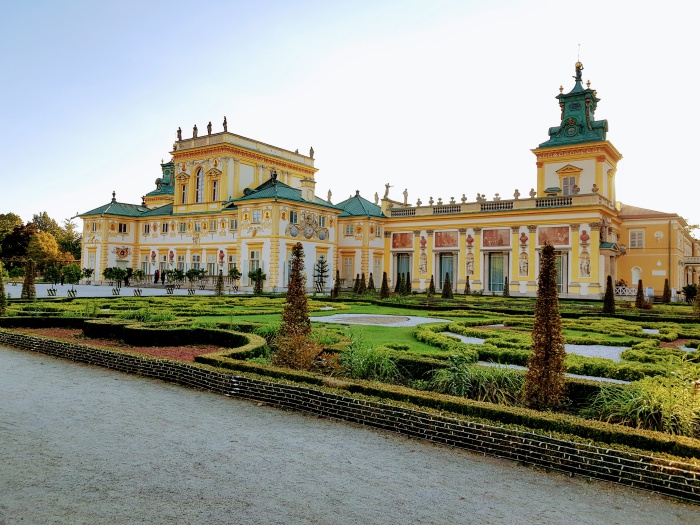 It was opened to the public as Poland’s first museum in 1805, and visitors can see furniture and artifacts from Europe and Asia.

Who is Jan III Sobieski?

King Jan III Sobieski of Poland, who is completely unfamiliar to the Japanese . 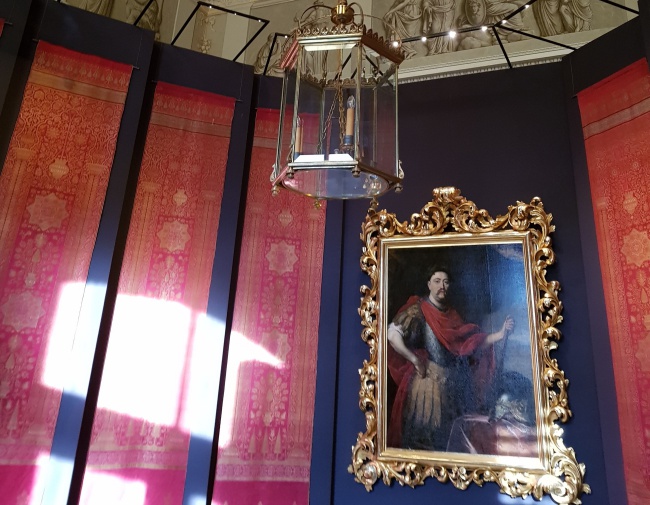 Jan III was King of Poland, but he was more than that.
He was a hero who saved Europe.

In the 17th century, Poland was ravaged by war with its neighbors.

The first one to show up was, yes, Jan III.

Jan III led the Polish army to victory in one battle after another.
After an impressive victory against the powerful Ottoman Empire, Jan III became King of Poland.

At that time, the greatest enemy of the European nations was the Ottoman Empire, an Islamic state.
The Ottoman Empire, with its capital in present-day Turkey, was expanding its area of control by buoyantly marching into Asia, Africa, and Europe.

In 1683, the Ottoman Empire led a 150,000-strong army to besiege Vienna in neighboring Austria.

Vienna was on the verge of falling after months of fighting with a large army of about 150,000 men.

Then Jan III came to the rescue!

The Ottoman Empire quickly declined following its defeat in this battle, and the European nations were spared from Ottoman domination.

Kings and popes from all over Europe congratulated Jan III on his victory.
Jan III became a hero when he defended the Christian world of Europe against the rule of the Ottoman Empire, an Islamic state.

His life then began a downward spiral.

We found ourselves spending too much money and time fighting the Ottoman Empire.
Politics and finances in Poland deteriorated out of control.
The Ottoman Empire was in the midst of a war.

Poland, which had been undermined by its neighbors, began to decline.

Jan III lost his presence at home and abroad.
In his later years, suffering from a chronic heart attack, he lived quietly in the Villaneuf Palace.

Jan III and the Vilanuf Palace

Jan III and his wife Maria Kazimiera were very fond of the Villaneuf Palace.

Jan III loved the arts and sciences.
In the palace, you can see his collection of furniture, clocks, and works of art.

Here are three must-see attractions when you visit Vilanuf Palace.

This is royalty! Luxurious Furniture & Decor

The glittering furnishings and decorations are a must-see, and offer a glimpse into the luxurious life of King Jan III at the time he lived.

This is what got me personally excited. The secret bookshelf.

It’s pretty enough to look at on its own.
There are even more exciting tricks.

The letters can be hidden in places where they are not visible at first glance.

The video is here.

No longer art! A garden that changes its expression with each season 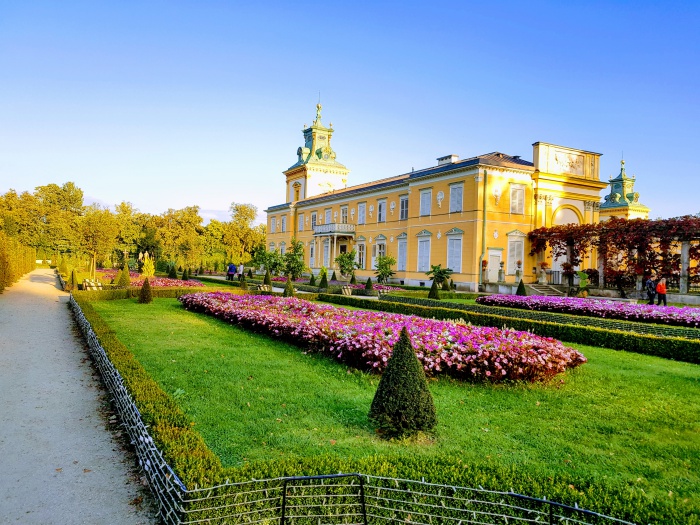 Artistic gardens like the Palace of Versailles, gardens with seasonal flowers, a rose garden and a lake that looks like a river.
You can enjoy the rich variety of nature at your leisure.

How to go by bus

You can take any bus without transferring.

From Warsaw Central Station
Bus No. 519 is convenient. Approx. 30 min.

attention (heed)
Please note that buses 116 and 180 have different routes on weekdays and holidays.
Shinsegae Street is not a street on holidays.

How to get there by metro or streetcar

There is no direct way to get there, and you will need to transfer to a bus on the way.
We recommend that you take the bus because you can get there without changing buses.

Hours of Operation and Days Closed

Information as of October 2018.
Please check the official website for the latest information when you go out.

Approximate duration of stay in palaces and gardens

There are two main types of tickets for the Palace.

ROUTE 1 is only the first floor, while ROUTE 1+ 2 offers access to the entire exhibit.

You can see the luxurious furniture and decorations of “The European Palace” in ROUTE1 and
Add ROUTE 2 to that and you can see Asian furnishings and a variety of hunting weapons used by Yang III.

Personally, I think ROUTE 1 is enough for a tourist visit.

You can read about ROUTE2 in the article I wrote about my visit.
If you are interested, please take a look ↓↓↓

On free days, it may be crowded and admission times may be limited.
If you want to get around efficiently, it is best to avoid this area.

What to expect when visiting Vilanuf Palace

Here are some things you should know before visiting Vilanuf Palace.

The ticket office is far in front of the palace.

The ticket office is not located near the entrance to the palace, but much further forward.

Find the yellow hut and purchase in advance.

You are not allowed to enter the palace with a backpack on your back. (Gardens are allowed.)

There is a cloakroom and lockers next to the turnstiles to enter the palace, so leave your belongings in one of them.

Both
Free
are.
Lockers require 2 zloty coins. (They will be returned after use).

Restrooms are in front of lockers before the entrance gate

There are no restrooms after passing through the entrance gates.

Restrooms are located in front of the lockers near the entrance gates.

There is a free commentary app.

The Villaneuf Palace has an official app.
While touring the palace, visitors can use the app to read and listen to explanations of the exhibits.

The only drawback is that it is in English, not Japanese.
Since it is free, I recommend this rather than renting an audio guide.

(Audio guide is 10 zloty. No Japanese)

There is a QR code near the exhibits, which can be read to get an explanation.

However, the commentary is quite lengthy.
Too much information to read…
It’s tough because I have to listen to English…

I gave up reading halfway through ^^;

The Villa Neuf Palace is a luxurious palace and a relaxing garden, both of which can be enjoyed at once.
It is a bit far from Warsaw city center, but it is worth the trip.

In researching Jan III for this article, a question occurred to me.

I must have studied world history, but the name Jan III doesn’t sound familiar at all…”

This is despite the fact that I had studied world history intensely for my college entrance exams.

Funny.
Even though it was more than 10 years ago, it should be in the corner of your memory.
Even though I vaguely remembered the word “siege of Vienna” in which he was active.

When I pull out my world history textbook and look at the “ya” line in the index, his name is not there.

When I looked at the Vienna Siege page, there is only one line that simply states.

The Ottoman Empire (among others) expanded its territory in the 16th century, but the failure of the Second Siege of Vienna (1683) was the catalyst for a shift from territorial expansion to contraction.”

Ah, poor Jan III.
His activities, which were praised as heroic, were completely cut out of the story.

I’m sure they use quite a few pages to teach in Poland.
The great Japanese figures that everyone knows would probably be almost unknown if the country were changed.
It’s kind of interesting.

I went to the Chopin International Competition for Period Instruments! Second Stage Edition
Good thing I bought from Amazon Germany! 12 recommendations from a German housewife of 3 years
RECOMMEND