I recently visited the Vilanów Palace, known as the “Polish Versailles.
I’ll show you what it was like, with lots of pictures!

Please read the previous article for basic information on the Villaneuf Palace.

I don’t know if it is because of the cold weather or if it is always like this, but tourists are sparse.
You can take all the pictures you want. 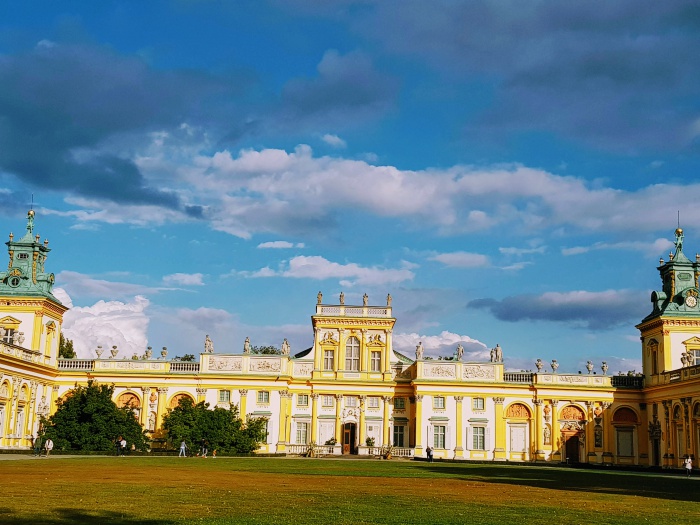 The palace is smaller than I had imagined.

Now, let’s go inside the palace!

Upon entering the entrance to the palace, a sign read, “Do you have a ticket?” A sign that reads.

Let’s see, where is the ticket office? 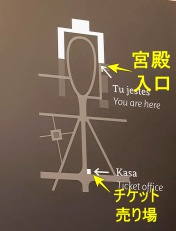 Too far!
Why go through the trouble of harassing me like this…

We had no choice but to return to the ticket office.
It looked far away on the map, but we arrived surprisingly quickly.

There was a ticket machine outside, so I tried to buy a ticket from it, but it seemed that this only allowed me to buy a garden ticket.

Tickets for the palace could be purchased at the small yellow hut next door.

There were several tickets.
We purchased Route 1 (Palace + Garden), which seems to be the most standard.

Please refer to this article for ticket details.


関連記事5 Minutes to the Palace of Villaneuf A comprehensive overview of the highlights, hours of operation, how to get there, ticket prices, and history of the Villaneuf Palace.
2022.11.29

After successfully obtaining the tickets, return to the entrance.
Come on! To the palace!

As I walked through the entrance gate and up the stairs, I was approached by a lady who was in charge of guiding me.

I didn’t quite catch the first half of the question, “Are there two of you?” I think that’s what he meant.

When I answered “Yes!”, the lady in charge of guiding me told me to go to the second floor first, and then to go up the stairs.

As we found out later.
You must have a “ROUTE 1 + 2” ticket to enter the exhibit on the second floor.


We had bought tickets for ROUTE 1, so we were originally only supposed to be able to see the first floor.

However, thanks to our and Auntie’s respective misunderstandings, we were able to see it.

Perhaps the lady was asking, “Route 2?” I think she was asking.
I think you should at least check your ticket… well lucky ^^^;

On the second floor, which can be seen with a ROUTE 2 ticket, there was a large collection of Asian art, mainly Chinese.

Frankly, I don’t think I need to go all the way to the palace in Warsaw to see something Asian…

“If I’m going to see something, I’d rather go to China from Japan and see the terracotta warriors and the Great Wall of China…”
I was talking with my husband, and we were making quick progress.

Next to the Asian exhibit was a display of hunting weapons used by kings in the past.

Drawers can be taken in and out without permission unless there is a warning not to touch them.
Compared to Japan, this Polish exhibit offers a high degree of freedom.

It’s interesting, but something a little different.
Is there anything more European…
Maybe this is the level of Polish palaces…

With such apprehension, I went down to the first floor.

Here it comes! It looks European.

I like this kind of retro look. I want it in my house.

The king’s bed was still canopied.

The rooms used by the king and queen were entirely glittering, from the ceiling to the furniture.
You’re getting serious, Vilanuf Palace.

In contrast to the maniacal second floor, the first floor was filled with gorgeous decorations and artwork that made one think, “This is a European palace.

After seeing the inside of the palace, we went to the garden.

There were many ticket vending machines lined up at the entrance to the garden.
Why not do the same for the palace?

A coin had fallen in the pond.
There are tourist attractions.

I think I like the back side better. It is glittering.

As we walked deeper into the garden, we saw a lake that looked like a river.

It looks nice to walk along the river in summer!
It was a bit chilly that day.

It was early fall, so we could just barely enjoy the flowers.
It was a little chilly to walk in the garden, but there were hardly any insects, which was probably a good thing on the other hand.

It takes about 1.5 hours to visit the palace and the garden.
It was spacious and very comfortable.

If you are tired of the crowds in Warsaw’s Old Town, why not take a break at the Vilanów Palace?

Not only in Poland, but also in Europe, small bees are common from summer to autumn.

It is not rabid and will not sting you if you do not attack it, but there is one tricky part.

They are very friendly.
Zero caution toward humans.

When I was outside drinking sweet juice, they would dive into the juice as if to say, “Give me a sip.